Closing and Re-opening tabs in Visual Studio with Ctrl+W

Visual Studio 2017 Undo-Close Update: The Productivity Power Tools have spun off into a bunch of more-focused extensions. To get Undo Close in Visual Studio 2017, you will want the Power Commands extension now.

Visual Studio 2013 Undo-Close Update: Since the prior options for re-opening closed tabs fell apart with the release of Visual Studio 2013, you will need the newly released Productivity Power Tools 2013.

Update: now with the ability to re-open closed tabs with Ctrl+Shift+T. This also allows you to re-open tabs closed by a project file reload, which is fantastic!

Ever tried to close a tab in Visual Studio 2010/2012 with Ctrl+W. If so, you find yourself selecting the current word in your text editor (Edit.SelectCurrentWord). I don’t use that shortcut, though I could see it being handy over my usual Ctrl+Shift+Right-/Left-Arrow. I do, however, use Ctrl+W to close windows/tabs in just about every other program I use. In order to make that shortcut work for your Visual Studio editing, you just need to assign it to File.Close instead.

For the visual, here’s a snapshot similar to what you will want (note: I already made this change before snapping a pic, so yours may look slightly different). 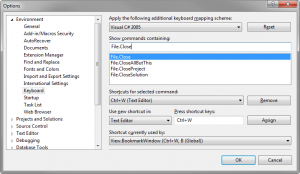 Now, you can happily close windows with Ctrl+W in Visual Studio. 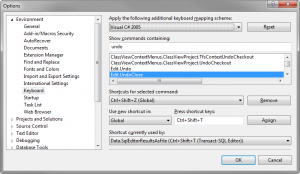 Just like with your favorite web browser, this will cycle through previously closed tabs, resurrecting them from their graves and restoring your cursor location to right where you left off when you closed them. Amazingly enough, this also works when Visual Studio closes your active windows when a project reloads.